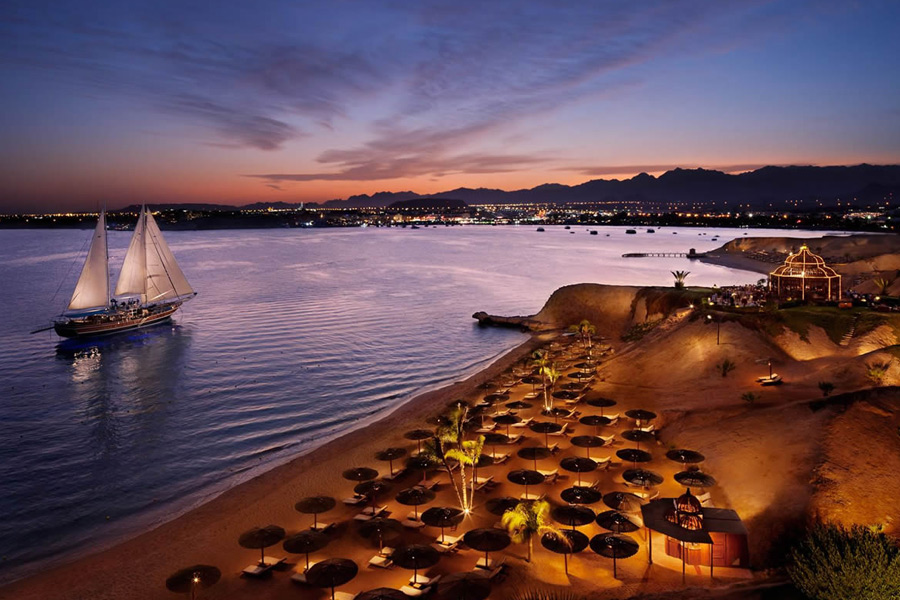 To photograph the resort area of Sharm El Sheikh, in Sinai, Dubai-based photographer Toufic Araman spared no effort
.He lit the hills. He lit—individually—the area under the area under each of the dozens of umbrellas on the normally dark beach. With an ingenious hack, I might add. He even lit the boat.

And he did it all without a single strobe, as he all but apologized to me later. That’s right, this is all done with continuous lights. And it wasn’t easy.
It was done as part of a 40-day shoot promoting international tourism to Egypt, which Araman calls “one of the best things to even happen” to his career. Sharm El Sheikh (map) is full of resorts, frequently illustrated with the predictable postcard-type imagery. But after scouting the area, he decided to go for something different.

But looking for something new and fresh, he found a different shooting position that offered a view of the city in the distance at night.

“I showed them the sky at sunset, boat pictures and gave them examples of architecture shots lit at that specific time,” he said. “They want to sell luxury; luxury twinkles at night, they gave me the go ahead.”

The shot was to be one of a dozen “destination” shots, which needed to work either with or without the inclusion of a large EGYPT logo.

He scouted the scene thoroughly, bringing along his head gaffer so they could be on the same page. All of the lights would need to be brought in, as Sharm is 700km away from any lighting rental outlets.

As for the lights, with the distances involved (up to 1.5km) there would be synching issues among other things. So the decision was made to go continuous. To give themselves control they used dimmers, manned by assistants with walkie-talkies.

The head gaffer had six assistants, so they divided the scene into zones. They pre-lit the hills, open areas, the pergola, the boat, inside the kiosks—and under every one of those umbrellas.

Each umbrella got a 150w bulb, and the entire “umbrella circuit” was connected to a single dimmer. This allowed him global control over what would have otherwise been a much more labor-intensive series of adjustments. The umbrellas were all fitted with the bulbs (and wires buried in the sand) the day before the shoot. Other areas, away from high foot traffic, were lit the day of the shoot.

Complicating the shot (in addition to the beach being dark at night) was the fact that they could not clear the beach on the evening of the shoot. They had to trust that the guests would leave the beach on their own after sunset. They did, about 40 mins before the light mix that Araman needed for his photo.

During this 40 minutes, assistants had to style/clean/arrange/align the beach lounges in the entire scene and adjust the lights. The crew accomplished this in 20 minutes, leaving Araman scant breathing room as a mix light approached.

Out on the boat, things weren’t any easier. The sails were unfurled, so the engines were running to keep it in place against the wind.
A chase boat (later Photoshopped out) with a generator and a 5k Arri was used to light-paint the hull of the sailboat. Everyone was on walkie-talkies, but the generator noise on the small boat made communication impossible. So they had to wing it.

Three 2k Arris were positioned on the big boat itself. They ran off of the boat’s onboard generator and were used to light the sails. Lots of images were made of the big boat to allow the retoucher the best possible odds of a nice final image.

Araman used a Canon 1DS Mk III with a 35/1.4 at f/11 at ISO 200. As the dusk encroached, he went to ISO 400 to keep a shutter speed good enough to freeze the boat. They shot tethered, evaluating the images on the monitor as they went.

Compared to the cost of renting big strobes, Araman notes, the continuous lights were cheap to rent. It was the crew itself—and the rental of the big boat—that soaked up most of the budget.

Many thanks to David Hobby for this awesome feature. You can check out the original blog post at: http://strobist.blogspot.ae/2012/08/stoppers-toufic-aramans-sunset-resort.html

The Fairytale of Galaxy – Silkier

Gleaming Art at the Fire Station